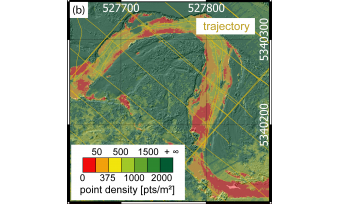 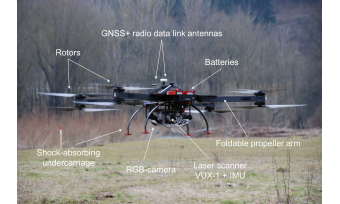 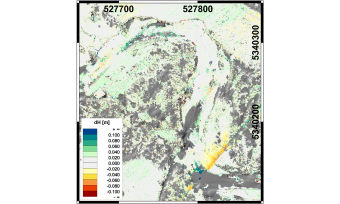 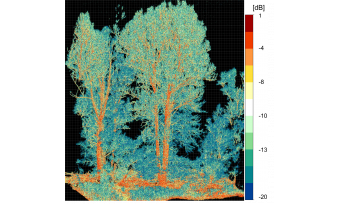 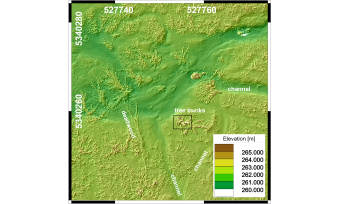 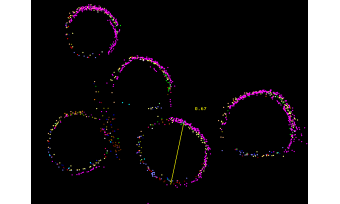 The development of lightweight, survey-grade Lidar sensors has made it possible to equip unmanned aerial systems (UASs) with very precise laser scanners, thus opening up new possibilities in the domain of close-range 3D mapping. To test the capabilities of UAS-borne laser scanning, a flight experiment was conducted using the RIEGL VUX full-waveform scanner mounted on a RIEGL RiCOPTER UAS platform. In the experiment, both the topography and the vegetation structure of an alluvial forest along the River Pielach in Lower Austria were captured. The resulting point cloud has a density of more than 1,500 points per square metre and an accuracy of better than 2cm.

The Neubacher Au is a Natura2000 conservation area near the confluence of the Pielach and Danube rivers (Figure 1). It is a highly dynamic landscape due to periodical inundation during flood peaks. The fluvial topography includes pristine channels, side channels and oxbow lakes. This topography is perpetually changing, as is the vegetation structure. As a retreat area for aquatic and terrestrial habitats, alluvial forests are of high ecological value. Mapping these sensitive areas with traditional terrestrial or airborne techniques is challenging due to the high complexity of the terrain and the vegetation.

The recent advance of survey-grade Lidar sensors with a weight of less than 10kg offers new perspectives for 3D mapping of complex natural landscapes in high resolution. To test the potential of UAS-borne laser scanning, a flight experiment was conducted using the RIEGL VUX sensor mounted on a RIEGL RiCOPTER UAS.

The carrier platform is a RIEGL RiCOPTER, which is an X-8 array octocopter. Four foldable carrier arms, each carrying a coaxial array of two propellers, are attached to the carbon-fibre main frame. A shock-absorbing undercarriage enables safe landings. The maximum payload including batteries and all sensor components is 16kg. At the maximum take-off mass (MTOM) of 25kg, the RiCOPTER achieves a flying time of 30 minutes. The maximum flight altitude is 150m, but nationally regulated limits for civil unmanned aircraft need to be considered.

The VUX sensor system is mechanically and electrically integrated into the RiCOPTER aircraft fuselage. It consists of a global navigation satellite system (GNSS), an inertial measurement unit (IMU) for capturing the flight trajectory, the VUX-1 time-of-flight laser scanner, a control unit and a camera for video downstream. Furthermore, two Sony Alpha 6000 RGB cameras can be mounted on the UAS. The scanner features an effective measurement rate of 350kHz with a total field of view (FOV) of 230°. The large FOV is beneficial for vegetation mapping as trees can be captured from both above the canopy and from the side. The ranging accuracy is 10mm according to the vendor’s datasheet. Figure 2 shows a photograph of the UAS and the sensor system just after take-off, with the alluvial forest visible in the background.

Data was captured on 26 February 2015 under leaf-off conditions. The flight crew consisted of the pilot remotely controlling the UAS and the sensor based on either a line-of-sight view or video images. An additional operator was present at the ground-station computer for flight mission guidance. The acquisition of the area of interest was based on a standard airborne laser scanning (ALS) flight plan with longitudinal and cross strips. The regular strip distance was 40m and the flying altitude was 50m above ground level, which was about 15m above the highest trees. Depending on the sensor-to-target range, the resulting laser footprint diameter was between 1 and 2.5cm enabling detection of small vegetation objects. Take-off and initialisation of the navigation system were performed manually. The GNSS/IMU system was initially aligned on the ground and after take-off by backward movements of the UAS. After finishing the initialisation procedure the autopilot took over control and the RiCOPTER subsequently flew the programmed path autonomously at a speed of 8m/s. The mission parameters and the large scanner FOV resulted in a mean laser pulse density of 1,500 points/m2 and in multiple strip overlaps so that the vegetation was captured from all sides.

The high strip overlap was additionally used for a thorough calibration of the entire sensor system in post processing by a strip adjustment. This was done by simultaneously minimising the point-to-plane distances of more than 100,000 correspondences. Within the strip adjustment, the acquisition system was fully recalibrated. This includes the estimation of scanner calibration parameters (e.g. rangefinder scale error), mounting calibration parameters (i.e. misalignment and lever arm), and strip-dependent trajectory errors (i.e. GNSS and IMU errors). The adjustment led to a substantial quality improvement of the acquired point clouds, resulting in a final relative accuracy of 1.7cm (Figure 3).

While thorough processing of the flight data is still work in progress, the first preliminary results are presented in Figure 4. A perspective view of the dense 3D point cloud coloured by reflectance is illustrated in Figure 4a, whereby the trunk, stem and thicker branches appear in red colour tones indicating high target reflectance and lower values (green to blue) are observed for the thinner twigs and their tips. Figure 4b shows a small section of the near-ground 5cm–resolution digital elevation model (DEM), which demonstrates that topographic features and dead wood can be mapped with remarkable sharpness. Furthermore, the density and spatial coherence of the point clouds fuel hopes that these point clouds can also be used for characterisation of terrain roughness with an accuracy better than 10cm. A potential field of application is flood modelling where, besides geometry, roughness (flow resistance) is an important input parameter.

Figures 4a and 4b both show the potential of the ultra-high-density 3D point cloud for detailed single-tree modelling. Whereas complete coverage of individual trees with points on all sides and from the trunk to the canopy is hard to achieve with terrestrial laser scanning (TLS), unmanned laser scanning (ULS) makes it possible thanks to the flexible flight path. ULS point clouds thus combine the advantages of TLS (short sensor-to-target range) and ALS (regular planimetric point spacing, bird’s-eye perspective). Compared to TLS, there is less scan shadow in ULS as the laser beam first traverses the rather sparse canopy area before hitting the thicker branches and tree trunks near the ground. Due to the high scan rate and the resulting ultra-high point density, many last echoes hit the ground surface. This enables the derivation of a very-high-resolution digital terrain model (DTM) with grid spacing in the 10cm range.

The diameter at breast height (DBH) is an important parameter in forestry since, in combination with the tree height, it allows the estimation of biomass. Whereas obtaining tree heights from ALS is already state-of-the-art, DBH estimation based on Lidar remote sensing is currently only feasible via TLS, which is both time-consuming and labour-intensive in forest environments. Figure 4c shows a horizontal section of the ULS point cloud including all points 1.20-1.40m above the terrain. In this dataset the stem diameters can directly be measured with centimetre precision. Individual colours are used in Figure 4c for the points of each flight strip, underlining the remarkable georeferencing quality.

The field experiment employing the RIEGL VUX sensor system mounted on the RiCOPTER UAS provided a homogeneous, ultra-high-resolution 3D point cloud of a complex alluvial area comprising both topography and vegetation. With a point density of more than 1,500 points/m2, a vertical strip-fitting precision of less than 2cm and a comprehensive 3D capturing of the terrain shape and vegetation structure, the experiment demonstrated the high potential of UAS-borne laser scanning for different environmental sciences and applications.